Until 1842, Cook, Flinders and Oxley had only charted the coastline and little was known about the Wide Bay Region. That year, Andrew Petrie and a party explored the Wide Bay River with their guides, escaped convict Bracefield and James Davis, another convict who had lived with the area's Aborigines.

Surveyor J. C. Burnett explored the area further in 1847. During this time, on the river bank opposite today's Baddow House, George Furber established a woolstore. The arrival of the Aldridge party (1848) spurred the rapid growth of the village of Maryborough.

This period saw the beginning of a port for wool, area sawpits and other primary produce. The Northern Road to Gayndah also started from this point. The Butchulla's prime fishing and hunting grounds and the settlement's location coincided – causing a major confrontation.

Maryborough was first settled in 1847 by Europeans and is one of Queensland's oldest cities. It was first settled as a wool port and served as the Fraser Coast immigration port in the early days of Australian settlement. It was second only to Sydney as an eastern seaboard port for free settlers.

Maryborough, with its fine old Queenslander houses and heritage public buildings is situated on the banks of the Mary River and is now a dynamic regional hub. The area has become a popular retirement haven and is something of a living museum with its remnants of opium dens and Wharf Street district heritage.

The city's connection with the port is maintained by a small craft marina and slipways for larger craft building and repairs. The Silver Eagle arrived in May 1880 carrying 264 immigrants from England. The immigrants finally stepped on to dry land after a three month voyage battling strong gales during the trip.

The selection of the current inner City area as the site for the permanent town and port was a result of surveyor Hugh Labatt's survey of 1849-50. The relocation of most of the 350 settlers of the original township occurred by the mid 1850s. The rapid growth of the new port and the town was stimulated by the timber, sugar, tallow, wool and hide industries. Trade and commerce were later consolidated with the Gympie gold rush.

While Maryborough was an important port, it was dredged regularly by the bucket dredge 'Maryborough' and pilots and their boats were always ready to help guide arriving and departing ships along the river. Sandy Cape, Big Woody Island and other strategic locations had lighthouses erected to light the way to the port.

The township boasted numerous wharves during these bustling times but most have fallen into disrepair or have been damaged by the floods that have hit Maryborough over the years. Specialised tugs were in short supply, but there were steam powered vessel operators always willing to tow ships, often three at a time, serving the port.

In 1856, in order to allow easier port access to bigger ships, the settlement was moved downstream a few kilometers from the original Mary River wharves. This is where the city of Maryborough stands today. In 1859 Maryborough was declared a 'port of entry' for settlers coming to Australia and it became a municipality in 1861.

In the following decades, trades, commerce and industry consolidated into a sound community and city. This was the same time that the colony of Queensland separated from the colony of New South Wales. The number of settlers to arrive via the Maryborough port of entry reached 23,000 by the end of the 1860s.

Sugar cane farmers were distressed over the cost of European labour and wanted cheaper, indentured labourers. This sparked the arrival of the labour recruiting ships or 'blackbirders' carrying 'Kanakas' or Pacific Islanders. The trade ceased in 1903, but not before approximately 12,000 Kanakas were brought here. Some thirty vessels were involved in the labour trade, the first being the 'Mary Smith', a schooner rigged sailing vessel that brought 84 Kanakas on the first of many runs.

By the early 1860's there where several timber mills in Maryborough. In 1882, Queensland pioneer Richard Matthews Hyne started the National Sawmill on the banks of the Mary River. R.M. Hyne, using his knowledge of the building trade, saw new opportunities in this expanding timber business. He had chosen his site with good judgment, as Maryborough was well served with magnificent stands of the Maryborough hardwoods; Blue Gum, Spotted Gum and Iron Bark and, as well, Hoop and Kauri Pine. (These exerpts were taken from the Hyne website)

The 'Flinders' was the last passenger vessel to service the Maryborough to Brisbane run and was withdrawn in 1925 after many years as an institution in Maryborough.

From that time on, opportunities to travel by sea was significantly restricted with the exception of the continued timetabled calls of cargo ships. 'E' class ships of the Australian National Line were the last such traders to visit the port. The 'Eurora', one such ship, was built here in Maryborough in 1950 at Walkers shipyard on the Mary River.

Maryborough also has several majestic heritage listed buildings, some dating back to the 1800s. Taking a walk through the city's Wharf Street Precinct is like taking a step back in history. There are several blocks of heritage-listed buildings and streets that have been transformed to look as they did over 100 years ago.

This area is also home to Maryborough's Heritage Gateway and Bond Store Museum and art galleries. The Bond Store Museum will take you on a journey of the development of the city as one of Australia's main immigration ports during federation.

Every aspect of the exploration of the Australian continent, the settlement of towns, and the consolidation of communities in Australia, is evident in the heritage of Maryborough and the Wide Bay.

The heritage of every trade, commerce and industry may be discovered in the area. Australian architectural forms and styles are readily seen in the City and surrounding areas.

Even the traditions and the lifestyles which have contributed to every stage of development of life in Australian communities lives on in the people, who like all Australians are growing in awareness of Australian heritage. 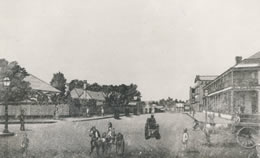 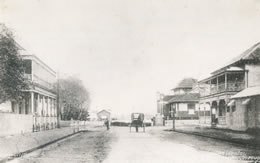 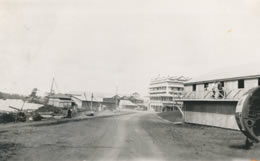 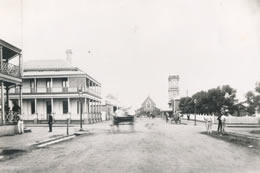 Maryborough from the Bell Tower 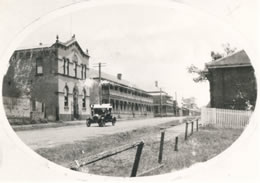 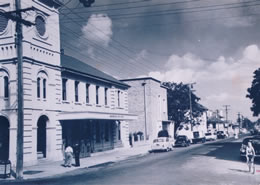 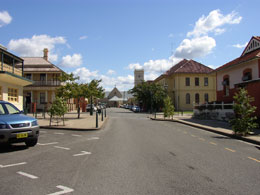